The squat is one of the most functional and useful exercises a person can do. It’s how you get in and out of a chair, in and out of a car, and on and off a toilet, just to name a few of life’s everyday activities. There are several squat variations, but which one is best? Perhaps the better question is; which is best for you for a given goal or situation? Let’s look at a few things to consider when choosing which type of squat to include in your workout routine. 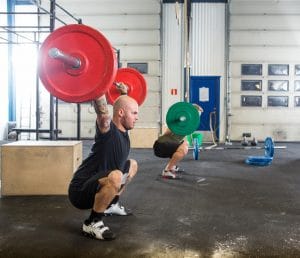 The human body is basically a third class lever system, with each bone segment representing a different lever being moved by the muscles and tendons that attach to them. The relative lengths of these levers can determine which variation of an exercise will produce a mechanical advantage for a certain individual. For example, the relative length of the femur, tibia and spine may influence whether a person will be able to maintain a more erect posture during a squat based on where their feet are placed on the floor to maintain center of gravity over their base of support. Placement of external load, ie a barbell across the shoulders during a back squat vs front squat, will also influence center of gravity of the lifter. So all other things being equal (flexibility, motor control, etc.) a person with a long torso and relatively shorter femur will typically be able to do a deep squat with good technique (spine parallel to tibia at the bottom of the lift), while someone who is short waisted and has long legs will typically be bending forward at the waist just to maintain their center of gravity. In this case, it has nothing to do with flexibility or strength, but trying to balance. Our shorter torso / long legged individual would probably be better off doing split squats or wide stance sumo squats rather than back squats for that reason.

My clients have included elderly folks as well as professional athletes. While both of these groups benefit greatly from doing squats as part of their workouts, they have very different goals in mind and therefore will not be training the same. The athlete is typically focused on performance for a specific sport and wants to be the best they can be. They are lifting heavy and often. My elderly clients just want to be able to do activities of daily living while maintaining a pain free independent lifestyle for as long as possible. They are usually just using body weight or very light external loads for resistance. We may need to consider past or present injuries or other health issues when deciding upon an exercise choice as well, no matter the age or ability of the client.

While not a comprehensive list, here are a few of the most popular squat variations you’ll see in the gym:

Probably the most popular in any gym, this is where the barbell is placed across the shoulders behind the head. This variation is where the vast majority of people can lift the most weight. Puts an emphasis on the posterior chain (yay!). Common technique errors are bending forward at the hips, usually because of poor flexibility in the calves or hips and poor core strength / stability.

This variation places the barbell across the shoulders in front of the head and puts more of an emphasis on the quads compared to the back squat. Most people do this one flat out wrong: instead of racking the weight on their shoulders with upper arms parallel to the floor, they hold the bar in their hands with elbows pointed down. These problems stem from poor flexibility in the wrists and poor posture – and / or they’ve never been taught proper technique in the first place.

May also be referred to as a static lunge; one foot is forward and the other back in a split position in the sagittal plane. Requires more balance for most people since there is a narrow base of support in the frontal plane.

The bar is held overhead through the entire movement. This is harder than you think, especially if you’re one of the short torso / long legged folks. Requires good flexibility in the upper body as well as the lower extremities and good core stability. A total body exercise, for sure!! 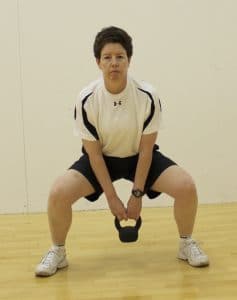 One of my favorites because it’s harder to cheat and your stronger side can’t help your weaker side. All kinds of things come out in the wash when you put someone on a single leg as far as their core stability, balance, motor control, how they compensate, etc.

Still not sure which squat variation is best for you? Get an assessment and recommendation based on your goals and individual mechanics. If you’re in the Minneapolis area, give me a call and learn more about how I can help you get the results you want!