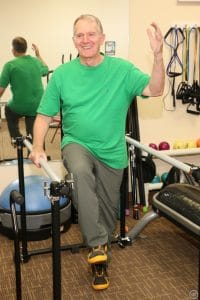 Mark Jefferson had always been an athlete, and he was still a competitive tennis player in his 60s when the trouble started.

He noticed he couldn’t step as far when chasing balls. Men he used to beat easily were suddenly topping him.

At Mark’s next medical checkup, his doctor noticed something about his gait and asked Mark to walk back and forth across the room.

“You have Parkinson’s disease,” the doctor said.

Further tests confirmed that diagnosis. And Mark suddenly had to learn about the incurable ailment and how to battle its symptoms.

April is Parkinson’s Disease Awareness Month, and a good time to discuss how exercise can lessen those symptoms and improve quality of life.

Parkinson’s is a neurodegenerative disorder that affects the brain. The cause is unknown, and progression differs widely among individual patients. Symptoms include tremors, problems with walking and balance, and limb rigidity.

Treatments include medication and surgery, says the Parkinson’s Foundation. It is not fatal itself. But complications are the 14th leading cause of death in the US, says the Centers for Disease Control.

Worldwide, more than 10 million people have it. About 60,000 Americans are diagnosed each year, almost all of them after 50.

“Any kind of exercise you do consistently will help improve your Parkinson’s symptoms and overall health,” the Parkinson’s Foundation says. That’s because exercise might slow the progression of the disease. It also:

“Boxers condition for optimal agility, speed, muscular endurance, accuracy, balance, hand-eye coordination, footwork and overall strength to defend against and overcome opponents,” Rock Steady says. “Parkinson’s causes a loss in many of the same elements that boxers condition to improve.”

Also, the Parkinson’s Foundation recommends activities such as:

Mark Jefferson, now 78, grew up playing baseball, basketball and running track. As an adult, he had tennis and other activities.

He says his healthy lifestyle has helped immeasurably since his diagnosis 14 years ago. He has lost friends to the disease who chose not to adopt an exercise routine and suffered for it.

“Exercise is extremely important,” says Mark, who is mostly retired from his career in financial services. “It has been proven to me 50 times: If you don’t keep moving, then you’re going to be in trouble.”

Mark lives with his wife of 60 years, still drives sometimes and can “hit the ball around” on the tennis court. He doesn’t use a walker, wheelchair or cane and says, “I don’t want this disease to define me. As you grow older, you still want to do things that you like to do.”

Mark exercises five days a week, usually a combination of boxing and workouts at the Fitness and Beyond studio in Omaha, Nebraska. Fitness and Beyond even offers multiple classes every week focused on improving strength and balance for people with Parkinson’s.

“We work on their gait, posture, functional movements, endurance, strength, balance and coordination,” says owner Jacey Gengenbach. “All of those things play into a person’s exercise program. It’s important to engage in different types of exercise, a combination of things.

I’ve had an opportunity to design exercise programs for several people living with Parkinson’s Disease, including my Mother. My advice is similar to what I tell all my clients: find a physical activity that you enjoy and do it on a regular basis. Focus on what you CAN do and work on improving or maintaining what you’re struggling with.

Yes, there are some specific exercise techniques that I incorporate into their workouts, such as BIG movements that are functional in nature. We also work a lot on balance activities and sometimes things that challenge cognition.

If you’re interested in learning more about how exercise battles Parkinson’s and how I may be able to help you or a loved one, shoot me a message.