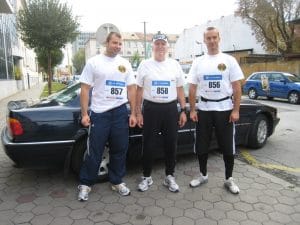 Vince O. is an 83-year-old marathoner who didn’t let heart surgery keep him from running.

And Vince, a former US Ambassador to his native Slovenia, has a message: You are the ultimate arbiter of your personal health.

“It’s a mental frame of mind on how you want to live and how you believe in living,” Vince says. “No. 1, you have to make sure that you are getting good medical attention for whatever problems you have. And if you get the right medical attention, you also stay active on it yourself, mentally, to get that medical result.”

This is no tough-guy talk, just a simple creed we should all follow: “Help yourself stay healthy.”

Health Is Our Individual Responsibility

Vince was born in the Slovak Republic, which was part of Czechoslovakia. His family fled the Nazis in 1938, and Vince eventually attended the US Naval Academy. He served on a submarine for five years, and then became an executive at corporations like IBM and Unisys.

He’s always been fascinated by the body and learning more about it to help his running. So when doctors advised a hip replacement in 2012, Vince did his own research and then advocated instead for a “resurfacing.” He’s still running today.

“I’m pretty cognizant about everything,” he says in an understatement.

Developing A Passion for Marathons

At age 55, Vince decided to start long-distance running. He completed the Boston Marathon in less than four hours in 1996. Three years later, his doctor said he needed to have a heart valve replaced. Vince asked if he could still run in the New York Marathon as planned, the doctor said yes, and he did.

Vince also ran the 5k in the National Senior Games in June 2019. Two days later he ran a 10k. A few months later he had the mitral valve repaired.

He rehabilitated, trained and ran another marathon in 2001. In 2008, Vince ran a marathon in Slovakia, where he was serving as the US ambassador (with a bodyguard on each side).

He’s run seven marathons and has a goal of 10. Age doesn’t slow him down.

“People need to be more active and involved in their medical situations,” Vince said. “We have doctors and they are supposed to know what they are doing and many of them do, but we as patients need to know what is wrong and be satisfied in our own mind: ‘Are we doing the right thing, are we doing enough?’

“Not enough people take that approach. People say, ‘The doctor said this’ and they do it. Inquire more. Ask what’s possible and take steps yourself to improve it.” Our personal health is our individual responsibility.