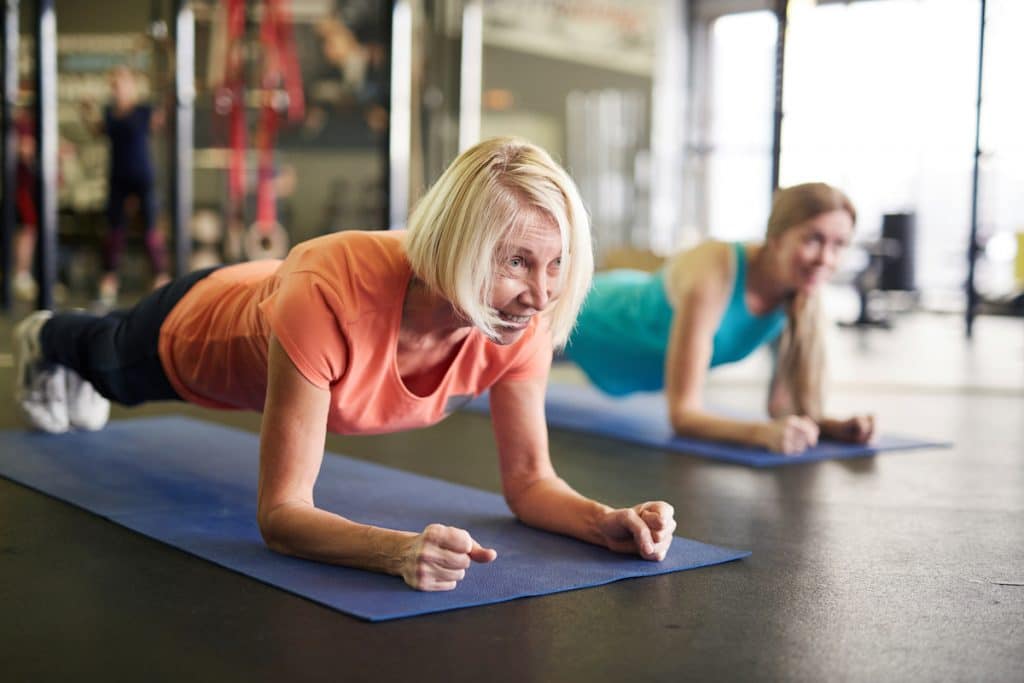 George Hood, a 62-year-old former Marine, made headlines recently when he broke the Guinness World Record for holding a plank position at a mindboggling time of 8 hours, 15 minutes and 15 seconds.

Even people who are very fit will struggle to hold a plank for more than a few minutes. Hood worked hard to take back his title, which he had lost in 2016. He trained almost seven hours a day for 18 months, including 2,100 hours in the plank position.

Most of us won’t want to try anywhere near that much. And good news: We don’t have to! The plank is great for core training, posture, gait, balance and more, can be done anywhere, and has many variations.

“Anybody can do what I do,” Hood, above, told the media after reclaiming his title. “Everybody has to start somewhere.”

It’s safe for people over 50 – as Hood’s example proves. Even for those who are not fanatically fit like he is.

The plank is one of the best core strength and spinal stability exercises you can ever do.

It helps your midsection without the strain of crunches. It’s an isometric exercise, so you don’t have to bend the spine. And it works more than just the abs, targeting the entire core, which wraps around us and stabilizes our bodies while doing everyday tasks. Stability and balance are essential for functional fitness.

When you’re in the plank position, you’re working just about every muscle in your body. The focus is on the core and abs. But you’re also using your legs, arms and back to stay in place.

I’m happy to show you in person, but here’s the basic idea. Start by lying face down on an exercise mat. Keep the elbows close to your sides directly under your shoulders,  with fingers facing forward. Straighten your knees, tighten your glutes and lift up. Keep your body straight and put your weight on your elbows and feet.

If it’s too difficult to hold that position, drop down to your knees, or try holding an incline push-up position with your hands on a wall, countertop, or bench. Review “how to regress a push-up” for more clarification.

Engage those core muscles and hold on. Remember to breathe 🙂

Aim for 20- 30 seconds at first. Rest a minute. Try for three rounds of that to start, a few times a week. You’ll be amazed how fast you advance.

One of the most common variations is the side plank. It’s good for lateral hip movement, as well. Others include using a Bosu ball or bench, or starting on your knees. There are so many variations that we can find one for you no matter what your needs.

Extreme examples like Hood’s can motivate the rest of us who want to stay strong and fit enough to enjoy life on a daily basis – whether it involves a lot of sports or just carrying in the groceries.

He told CNN he plays Van Halen when he’s trying to power through a workout or set a new world record.

“When it gets tough, you know what I do? I turn that music up so loud, you’d think you’re at a rock concert. I always had a fantasy of being a rock star back in the ’80s,” Hood said. “And at least for those 8 hours, 15 minutes and 15 seconds, I was a rock star.”

Let me show you how to build the plank into your routine, too.