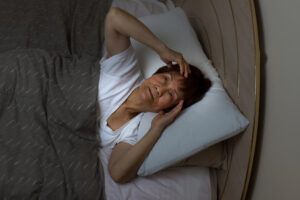 During the last few decades, sleeping less has become a very common behavior in western countries. While many may view sleeping as little as possible as an admirable behavior, evidence shows that poor sleep may have adverse health effects.

Sleep plays a major role in hormone balance and glucose metabolism. Several hormones respond to poor sleep in a way that can lead to fat gain, muscle loss, type 2 diabetes, and obesity.

Many mid-life women experience problems getting good sleep, which may be a contributing factor to gaining menopause belly fat.

Blood glucose levels are normally tightly regulated within a narrow range to avoid either high or low blood sugars, as both conditions can have life threatening consequences. The ability to metabolize excess blood sugar and return to normal levels typically varies across the day and night, and even during different stages of sleep.

The brain relies heavily on glucose for energy and is a major site of glucose utilization during sleep. Therefore, major changes in brain activity such as the sleep-wake and wake-sleep transitions impact glucose tolerance.

Ever notice after a night of tossing and turning that you are hungrier than usual the next day? And you’re probably not craving salmon or kale.

It’s got an evil twin, leptin, which is supposed to tell you when you’ve had enough. It won’t after a night of poor shut-eye.

As a result, poor sleep = eating more food, which then leads to weight gain.

Worse yet, if you’re eating foods high in sugar (because…. you will after a night of tossing and turning), you end up with blood sugar spikes. Insulin follows, and insulin is a fat storage hormone (especially belly fat).

Energy expenditure is a fancy way of saying “burning calories.” It plays an important role in controlling body weight and composition.

The total amount of energy expenditure is composed of three components:

Resting metabolic rate aka basal metabolic rate is simply the energy consumed at rest, doing nothing but breathe, think, have a pulse, maintain body temperature, and basically just exist at rest in a fasted state. It accounts for approximately 60% of your daily total energy expenditure.

Thermic effect of meals is the energy expended digesting, absorbing and storing food. It’s about 10% of your daily energy expenditure.

Activity related energy expenditure comes by moving your body. Most of it will come from non-exercise activity thermogenesis (NEAT), such as sitting, standing, making dinner, doing low intensity walking or other occupational tasks, etc. It can also include formal exercise. This is the one you have the most control over 🙂

When you’re tired after a night of poor sleep, you don’t feel like heading to the gym for a workout or doing more physical activity.

Fewer calories burned on a consistent basis can contribute to weight gain.

How to Get Good Sleep

This is just a very basic overview of several different pathways where poor sleep can contribute to fat gain, increased insulin resistance, and increased risk for developing type 2 diabetes.

Good sleep is a critical component to good health and quality of life, so make it a priority in your everyday life!

You’ve heard most of the sleep hygiene suggestions – which do you still need to try for yourself?

Wishing you a night of deep, blissful, sleep.