One of the more common abdominal strengthening exercises you’ll see in the gym is the prone plank, for good reason. It doesn’t require any equipment so it can easily be done at home, doesn’t require a lot of time, and is highly effective at improving core strength and stability. It tends to be more of a whole body exercise rather than isolating the anterior abdominal region the way traditional abdominal crunches do. When done correctly,  the plank exercise promotes good posture, stability along the entire spine, shoulder girdle stability, glute activation, and trunk strength. The key words here: when done correctly.

To ensure you are performing the prone plank with good form, follow this checklist:

Chin is tucked and neck is in good alignment with the rest of the body. Eyes should be gazing between hands.

Forearms should be parallel to each other with elbows directly under shoulders. Hands should be shoulder width apart.

Shoulder girdle (scapula) should be neutral.

Abdomen should be drawn in. Pelvis is neutral and in line with head and shoulders.

Hips, knees and feet are in alignment – hip width apart. Glutes are activated. Legs are straight.

Toes are tucked under so that you are on balls of feet (easier to do without shoes). 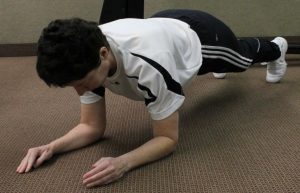 Lifting head up and looking ahead rather than gazing at floor between hands. Lots of stress on an extended cervical spine.

Allowing head to drop towards floor.

Holding hands together, which puts shoulders in an internally rotated position. Many (if not most) people already have muscle imbalances that cause their shoulders to be more internally rotated than they should be. Doing the plank in this position just reinforces that imbalance and is not as effective at developing shoulder girdle stability as the correct neutral position. 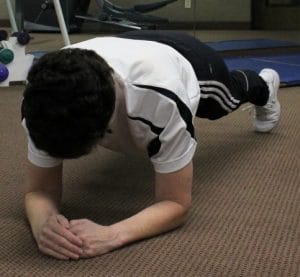 Allowing shoulders to round, or shoulders to sag so that scapula wing. Keep everything neutral to strengthen stabilizing muscles in the shoulder girdle.

Trunk is sagging in the middle.

Shifting weight to one side of body.

Allowing hips to tilt to one side.

Remember – it doesn’t matter how long you can hold a plank. What matters is how long you can hold a plank with perfect form. If you find yourself struggling to do this exercise correctly, consider regressing the exercise by going on to your knees until you gain the strength and stability needed to do the full plank. Once you get to that stage, there are many options for progressing the exercise.